So here’s the story for today.

We have a dirty shower.

I can say that with no shame because I am a bath kind of girl, so Brad is singularly responsible.[Note: And if you read yesterday’s post, then you understand my statement of, “…because he puts up with me,” and you’d know it’s true since I just threw him under the bus for the dirty shower.]

I only shower when the weather is 110 degrees outside and I’ve been doing yard work. Then I shower only to wash the “ick” off, and then I take a bath. I take a bath every night… with bubbles… as hot as I can stand it. I frequently come out looking scalded, but it feels so good. It’s sort of like my evening glass of wine… only deeper… and hot.

At about midnight last night, as I am climbing out of the bath tub, Brad’s shower catches my eye. I sink to the lowest point of desperation.

I reach for my iPhone, tap the Safari icon, and search… DIY shower tile cleaner

This resulted in me rumbling through the house with my iPhone now serving as a handy-dandy flashlight attempting to see if we have distilled white vinegar and BLUE Dawn, because according to Fabulously Frugal, these are the magic ingredients guaranteed to bring forth a clean shower from the pit of the gunk.

And would you believe it?! Score one for the grocery shopper in our house! We have both! 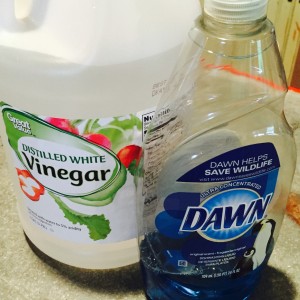 Now, let me brag on Fabulously Frugal just a bit more, because not only do they have the recipe, but they have a PICTURE TUTORIAL! How can I mess this up?

I was greatly tempted to microwave (as instructed) the white vinegar in the middle of the night and go to work on the shower, but I decided since Brad was sleeping perhaps it could wait until morning. So I awoke very early and got to work immediately mixing 12 oz of hot white vinegar and 10 oz of BLUE Dawn. Please sadly note that my pictures are not near the quality of the picture tutorial I was using as my guide. 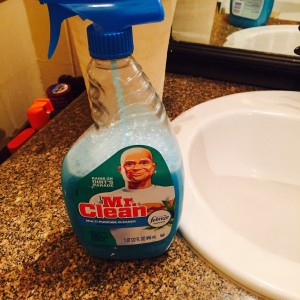 And then I liberally coated the walls of Brad’s shower… with emphasis on the “liberally” and the “coated” if you catch my drift. Notice the BLUE Dawn puddling where wall meets floor. 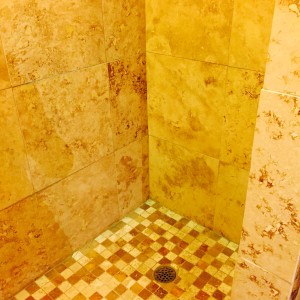 And, as instructed, I allowed it to set. All. Day. Long.

Until 10pm tonight when I saw Brad pulling in the driveway from prison, and I realized I had not completed the job. No sweat. I figured I just turn the shower on, and a quick rinse later an the shower would be sparkling clean.

But the problem is… I did not read the directions which clearly stated, “This cleaner just melts the gunk and grime right off … You don’t even have to scrub it. I just wiped it down with a dry washcloth.”

And I don’t have to think… I know…

Now y’all know I’m not really blonde. In fact, I didn’t get home until about 9:30 tonight because I was having my hair dyed so it’s not really blonde anymore anyway. I’m also actually fairly educated and I pride myself on keeping a very tidy house, but I couldn’t even pull off a DIY shower cleaner. And, to top it all off, I had a huge mess on my hands.

In the midst of using a giant mop bucket to “shower” the walls repeatedly with clean water, I began thinking…

Others sure can make it look easy… or pretty… or better… or perfect… or fill-in-the-blank.

And when they do, if I’m not careful… I somehow feel less.

In today’s world, we spend an awful lot of time comparing ourselves to others. Facebook, Twitter, Instagram, Pinterest… all comparison traps! And it’s not just social media. Advertising and marketing folks take full advantage of our obsession with comparison and bombard us with easier, prettier, skinnier, better, faster, you name it… if we only buy whatever it is they are selling.

But let me give you one more math lesson for the night… one that teaches us that not only is less okay, it’s what we’re striving for.

Life on this earth is not about us becoming greater. It’s not about one single thing we can purchase or achieve to increase our greatness.

The only thing we should be focused on becoming greater is the space Jesus takes up in our hearts and lives.

Join me in saying no to comparison and yes to Jesus!