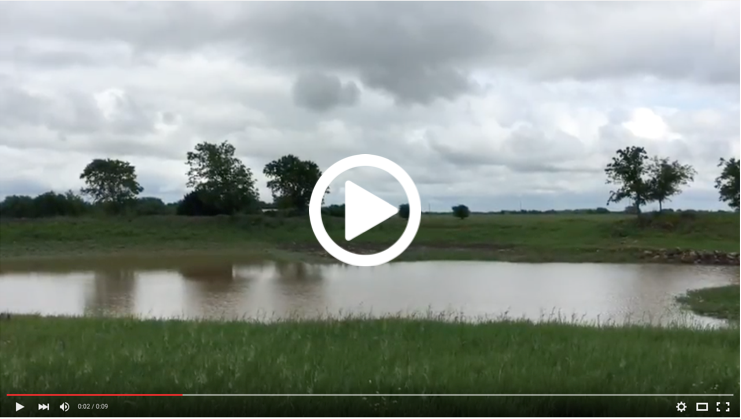 Ok. Here’s the deal. This story will make little sense to you unless you click on the play button above and watch the video. It’s a whole nine seconds. You’ve got time.

So this is our tank. I had no idea it had this much water in it, except I could hear it. Yes, that’s right. Hear it. All the way up at the house. Now I can’t tell you exactly how far the tank is from the house because I’m a terrible judge of distance. But suffice it to say that I think it’s far enough that I typically choose to drive the Gator out there rather than walk. Despite the distance, earlier today when I went out the back door of the house, the frog chorus was like surround sound! I could not believe I could hear from that far away.

Curiosity made me do more than ride down to the tank to get a look and get this quick video. It also made me google to find out why frogs croak. Well, as it turns out, it’s primarily male frogs that croak. { What is it about males and their bodily noises?! } Anyway, croaking is a love serenade. Male frogs croak pretty much for the sole purpose of finding themselves a mate. Because… and I quote Google… “Female frogs think croaking is very sexy.” It takes all kinds.

So all this sexy frog racket got me to thinking: If I can hear the noise all the way up to the house, how in the world does one male frog find the right female frog? I mean, really. Well… to quote Google again… “Male frogs are not particularly bright when it comes to sex. They’ll attempt to mate with anything that moves, including other males and floating leaves. Eventually they’ll figure out they’ve made a mistake and try again with a different target.”

Well, sweet mercy. That explains why there is so much racket. Those poor male frogs don’t want to be just another croak in the crowd.

You know what? We shouldn’t either. As followers of Christ, our voices shouldn’t blend in with the noise in the world. We shouldn’t sound like everyone else. We should be noticeably different… not only the way we talk, but more importantly in the way we walk.

In a world where darkness masquerades as light…
where political correctness tramples Truth…
where fashion belies true beauty…
and where our busy-ness leaves no room for being still…
it’s critical we all take a look in the proverbial mirror and ask ourselves, “Are we just another croak in the crowd?”

Why fit in when you were born to stand out?

Dr. Seuss said it. Jesus modeled it. We are to live it.

If we know Him, we will make Him known.

2 thoughts on “Just Another Croak in the Crowd”